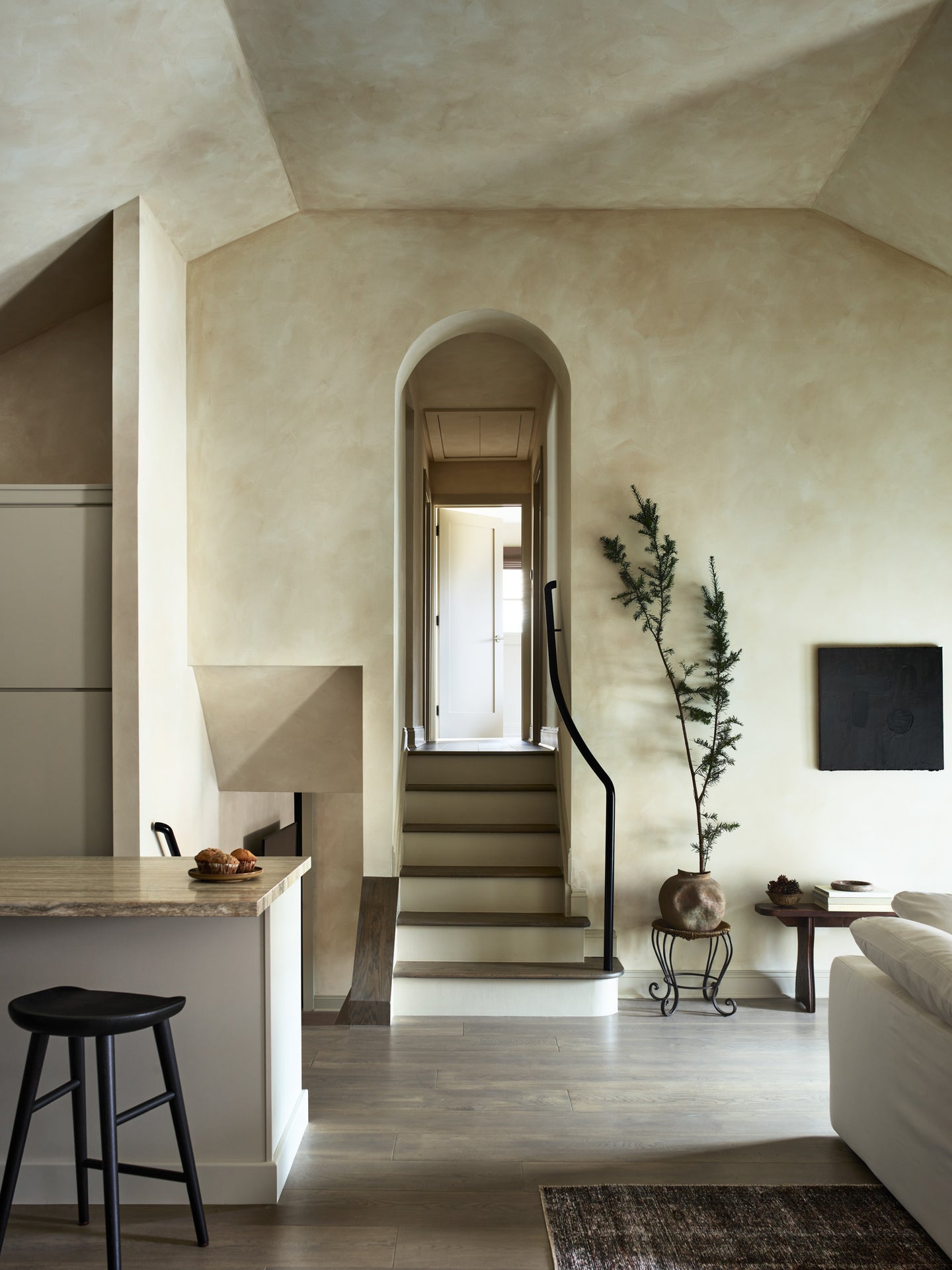 When most people go from living with roommates to living alone, the thing they look forward to the most is having full control over the TV remote. But New York City–based designer Elisa Baran’s client, a woman in her late 20s, had different indulgences on her mind when she bought a run-of-the-mill split-level house on Long Island and tasked Baran with turning the space into a wabi-sabi retreat inspired by her travels to France and Italy. The direction led Baran to covering each and every one of the interior walls in limewash paint. “I really wanted to envelop the house in this cozy, textural feeling,” says the designer.

The trick was nailing the look. Baran started out with JH Wall Paints’s 103 (a beigey hue) and 101 (a very white shade) but quickly realized as the painter was applying the treatment that it was getting lost on the wall. “It was looking flat,” she recalls. Eventually, the designer ended up texting with the founder of the brand, who suggested she swap 101 for 114, a dark brown tone. It ended up being perfect. “Paint is so tricky and can play with your mind every time of the day, depending on how the light hits it,” notes Baran. “Although a professional is not required, to me it’s necessary if you’re a perfectionist. The left-to-right wrist technique for application is an art in itself.” The homeowner’s new beginnings were made even sweeter by these four additional upgrades.

When Baran first stepped into the space, she was struck by how dark it was. “There was no light whatsoever and there weren’t even blinds or curtains covering the windows,” she recalls. Blowing out the attic space right off the bat (the homeowner didn’t have any real use for the nook) made the 1,500-square-foot home feel instantly bigger. The newly open-concept kitchen gained 20-foot-high ceilings alone. In the living area, custom curtains from the Shade Store in brown wool make the space feel super-intimate.

One top request from the homeowner was to carve out a workout zone. Once the attic was gone and everything opened up, Baran followed her gut and turned the den into yoga-Pilates heaven. “She can walk down from her bedroom, grab her coffee, and then she’s only six steps away from the gym,” she says. Opting for hardwood floors in this area was key to its function—the hardy surface can stand up to sweat and water, and it won’t dent easily when heavy weights hit the ground. Baran carved out storage for her client’s equipment by tearing out the two lower cabinets (once designated for TV gear) and had her contractor plop in some salvaged wood planks.

Don’t Be a Square

Baran turned the once-squared-off threshold leading to the bedroom hallway into a focal point simply by changing its shape. “It needed that fun element to make it feel like her home,” she says of turning it into an arch (by adding two curved wood pieces in the corner and drywalling the whole thing, she achieved the perfect swoop). The designer then had a local metalworker create a custom iron railing to complement the rounded edges.

Mix High and Low Versions of the Same Stone

Instead of going for custom vanity bases, Baran bought premade floating walnut ones from Wayfair. Her hack: Top them with high-end travertine from ABC Stone so they look completely bespoke. “Just read the reviews of whatever you’re buying and make sure you can return the item if it doesn’t end up working out before purchasing!” she warns. Buying slabs of travertine for the kitchen counters and backsplash, plus the bathroom vanities and shower bench, was no small purchase. So Baran helped make up for the expense by switching to more affordable travertine tiles for the main shower walls. In the guest bathroom, she embraced a rare moment of color with affordable red tiles from TileBar that shipped quickly.

The thing about buying a house for yourself during a pandemic is that you get lonely fast. So while Baran’s client’s intention was to live there alone (or list the property and reap the ROI), she’s now on the hunt for roomies—and the search won’t take long.