The waterfall countertop trend is really strong right now so it’s about time we talked about it in more detail. A waterfall countertop is easily recognizable by the fact that it drops vertically down the sides instead of stopping abruptly at the edge of a cabinet or island.

By doing that it creates a continuous flow and links the floor to the cabinetry in a fluid and natural manner. The impact that a waterfall countertop has on a kitchen (or a bathroom) can be observed on multiple levels. 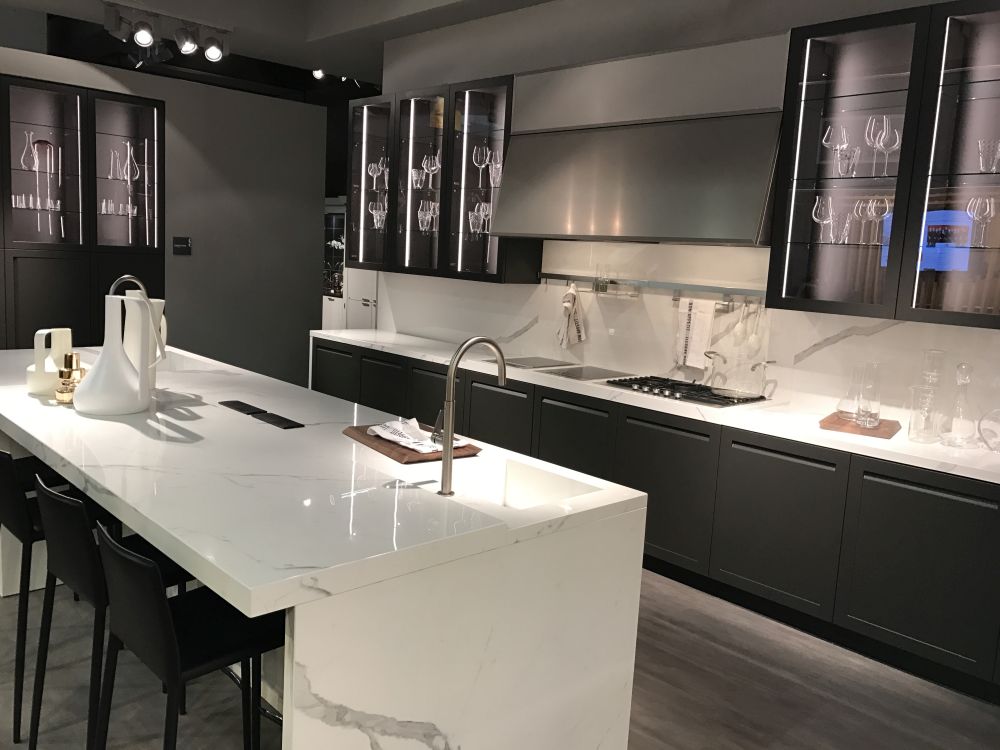 Waterfall countertops have a sleek and minimal look which makes them a particularly good option for contemporary interiors. Their strong and clean lines would look out of place in a traditional or farmhouse kitchen but they’d fit nicely in a modern or contemporary bath. 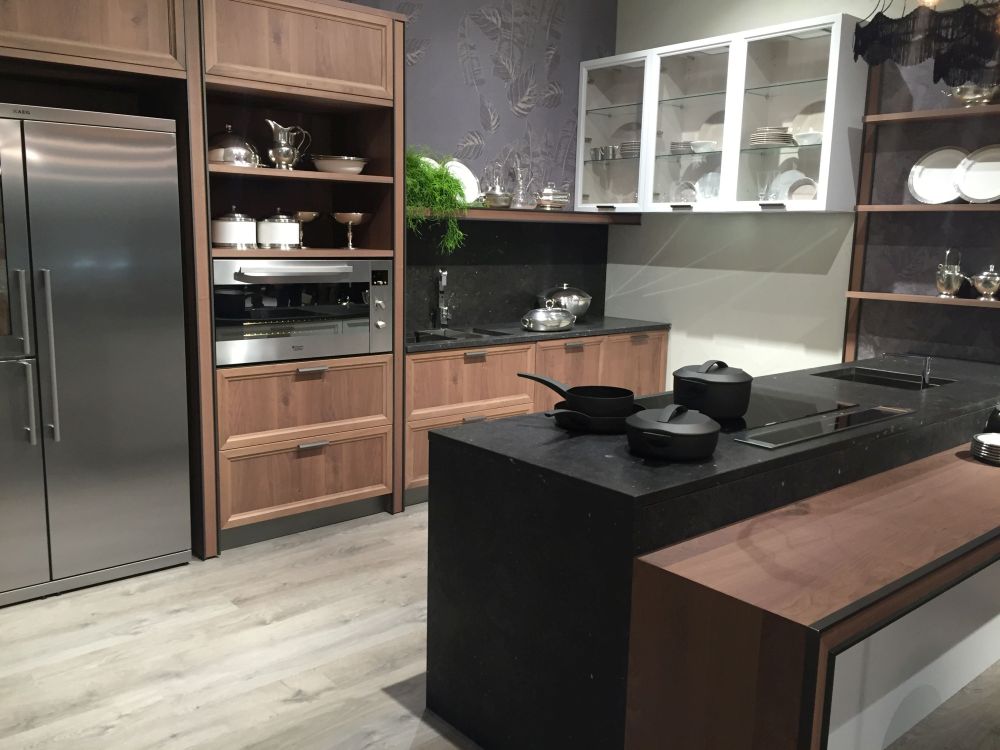 The role of a waterfall countertop is not only to establish visual continuity between the floor and the worktop but also to hide appliances, to protect the cabinetry and be eye-catching and dramatic from a visual point of view. 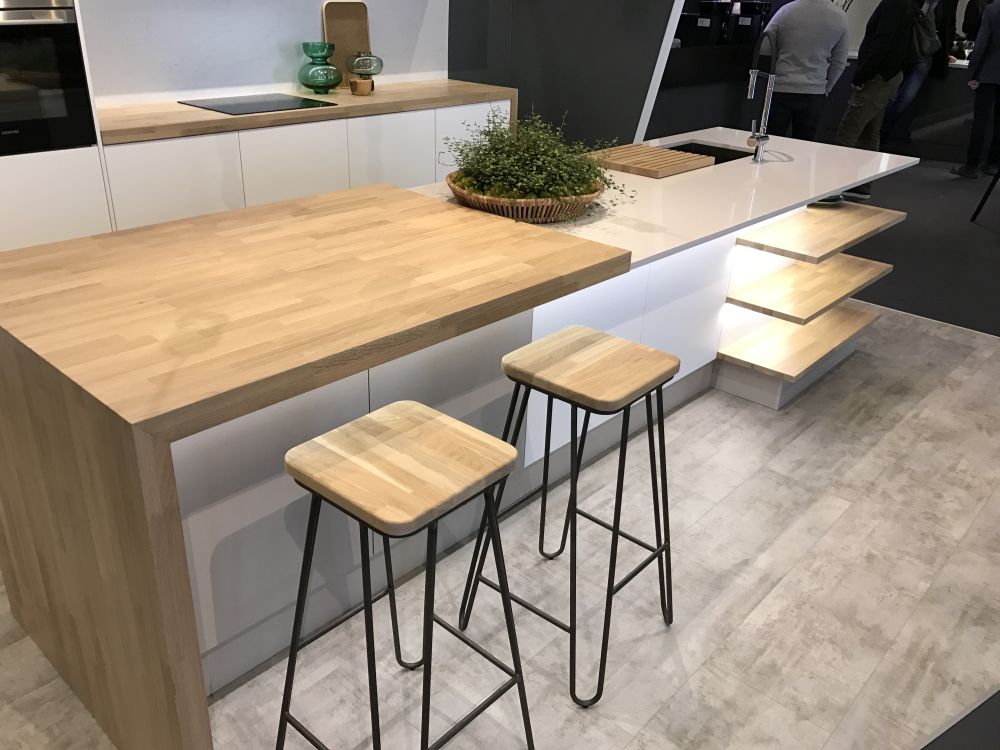 Also, the waterfall design allows you to show off the material of which the countertop is made and to basically elevate an ordinary island or cabinet to a whole new level, turning it into a piece of fancy and sophisticated furniture. It’s such a simple feature that makes such a big difference overall. 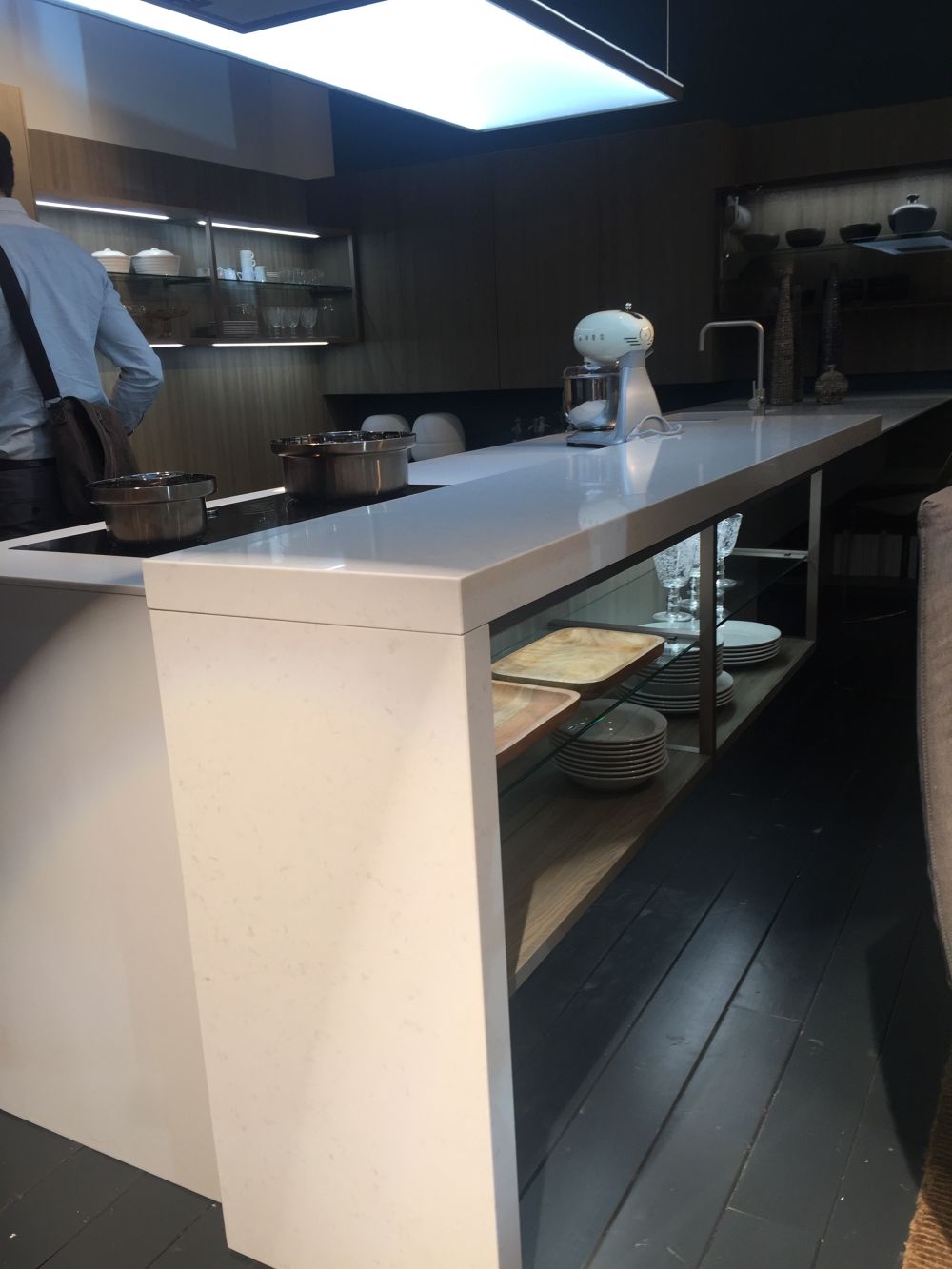 Considering this dramatic impact that waterfall countertops have on the interior design, the material usually chosen for them is one that makes a statement. That usually means some sort of natural stone. Marble, granite and quartz are all great options and lately concrete and wood started to stand out as well. The last two offer an extra advantage: they’re DIY friendly and considerably cheaper than the others. 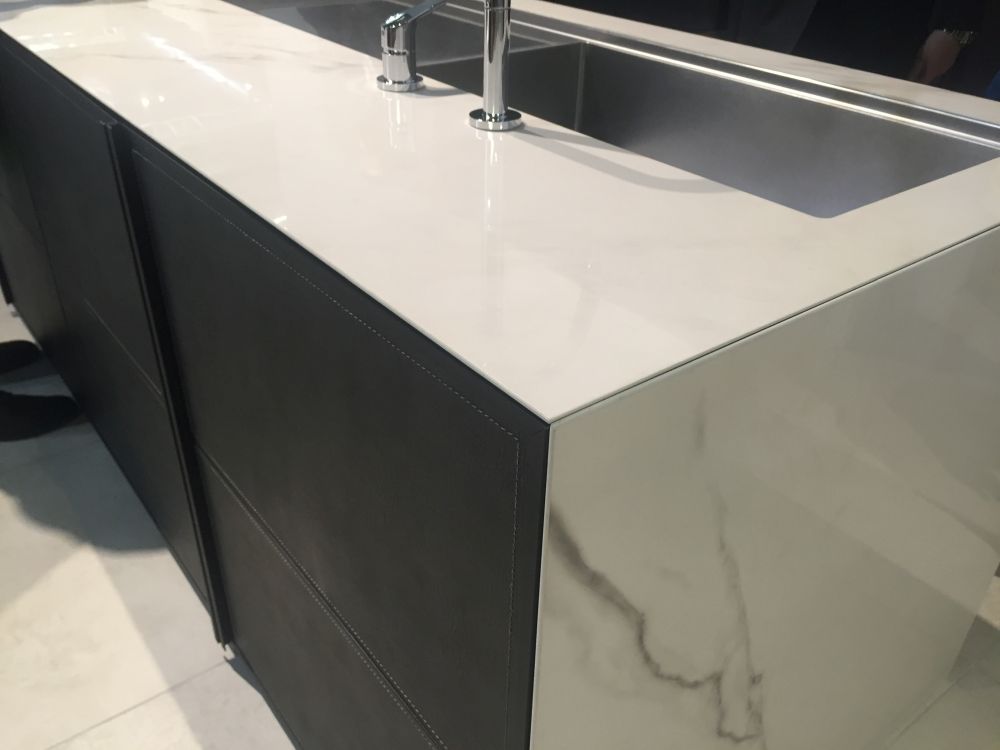 A waterfall countertop is an important focal point for the entire space it’s in, be it a kitchen or a bathroom. It’s a centerpiece which puts on display the beauty and uniqueness of the material it’s made of but which can also put an emphasis on texture or color. 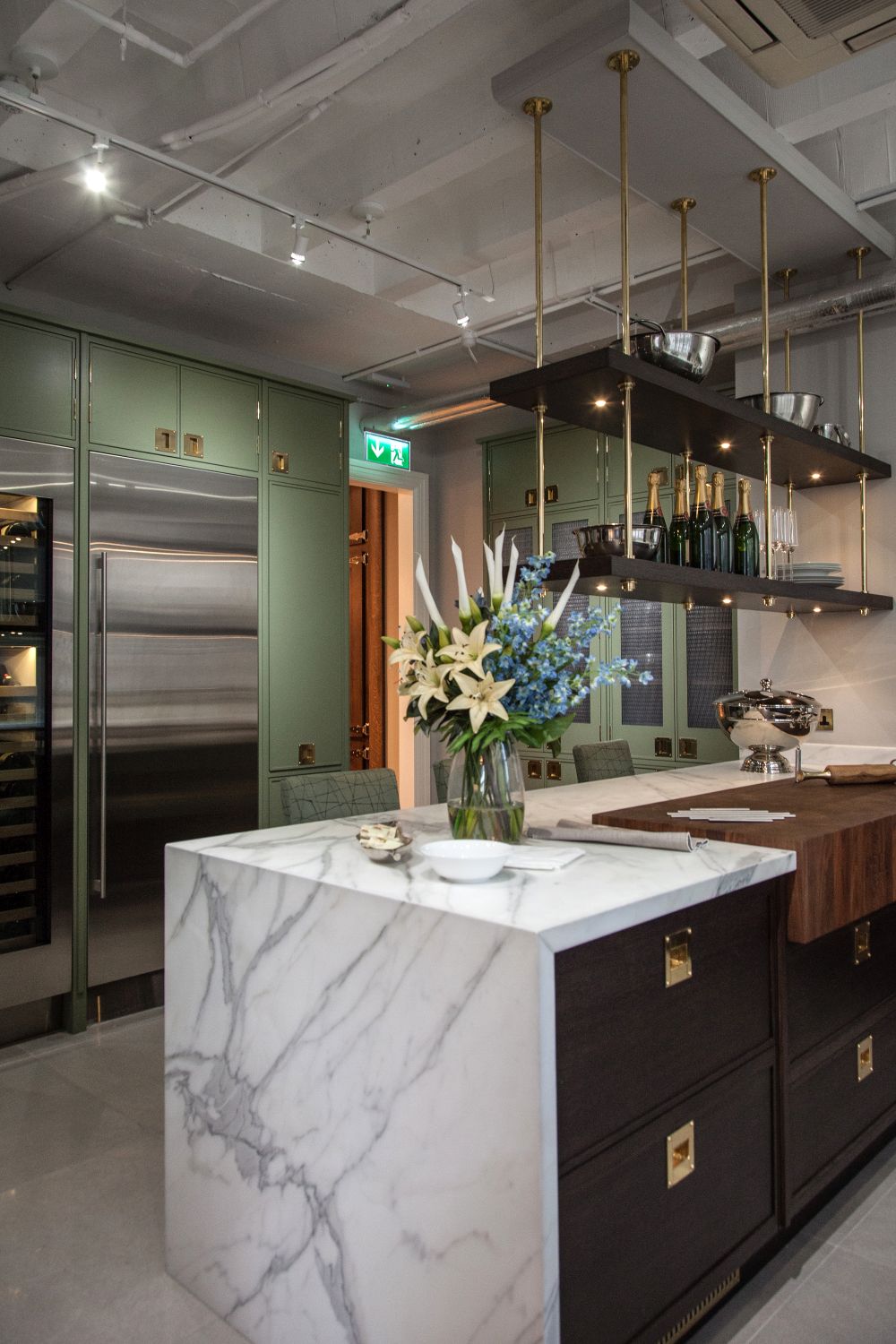 It’s usually the fluidity of the counter which impresses the most, the fact that it drops down like a waterfall and that it goes all the way down to the floor. The verticality of the surface is an unusual detail and the transition from horizontal to vertical has to be as smooth and as fluid as possible in order for the waterfall effect to truly be successful and worthy of attention. 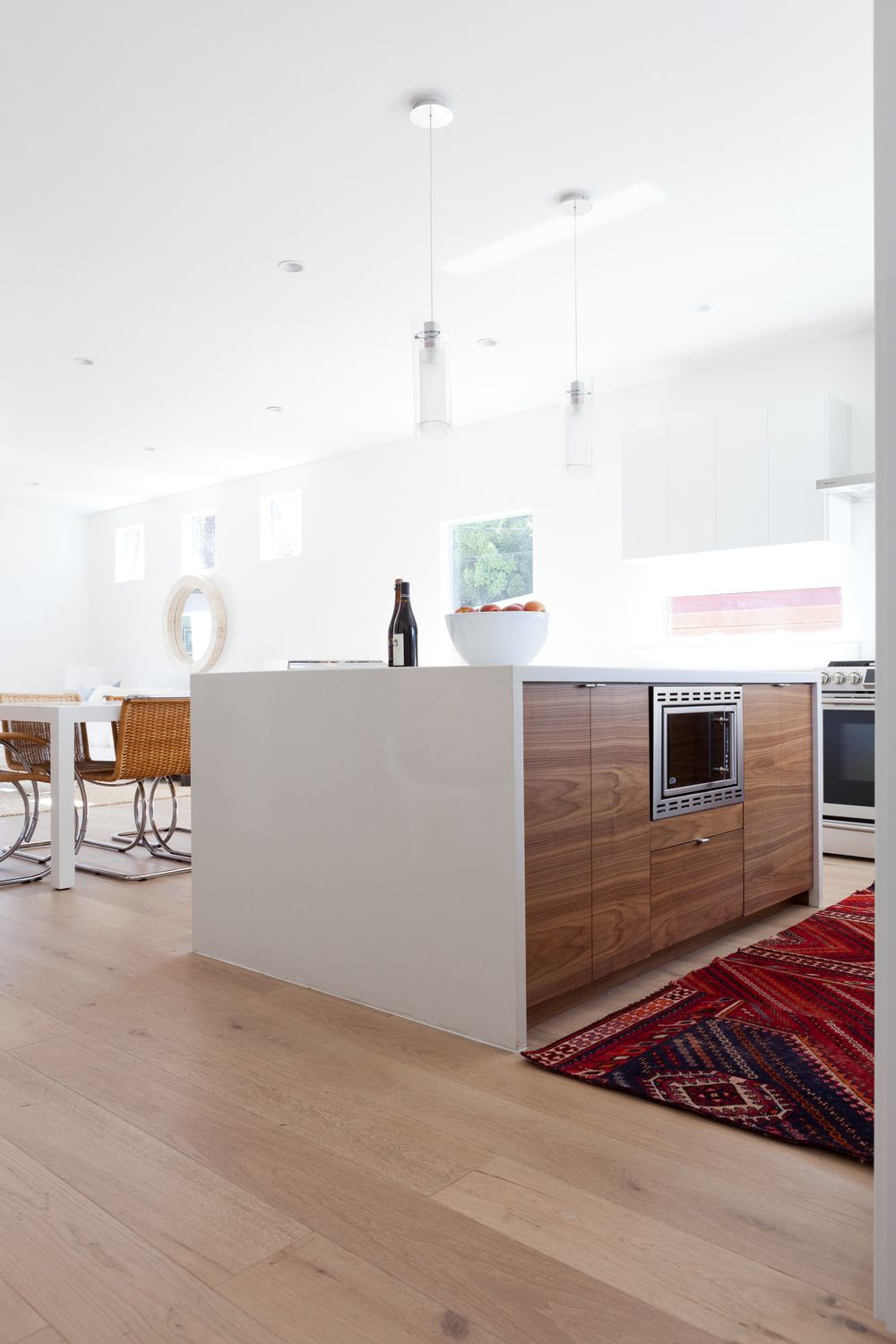 You can witness the minimalism and beauty of the waterfall countertop in this remodeled kitchen which has a chic island with wooden storage spaces and built-in appliances and which is wrapped in a crisp white counter which drops down both sides. 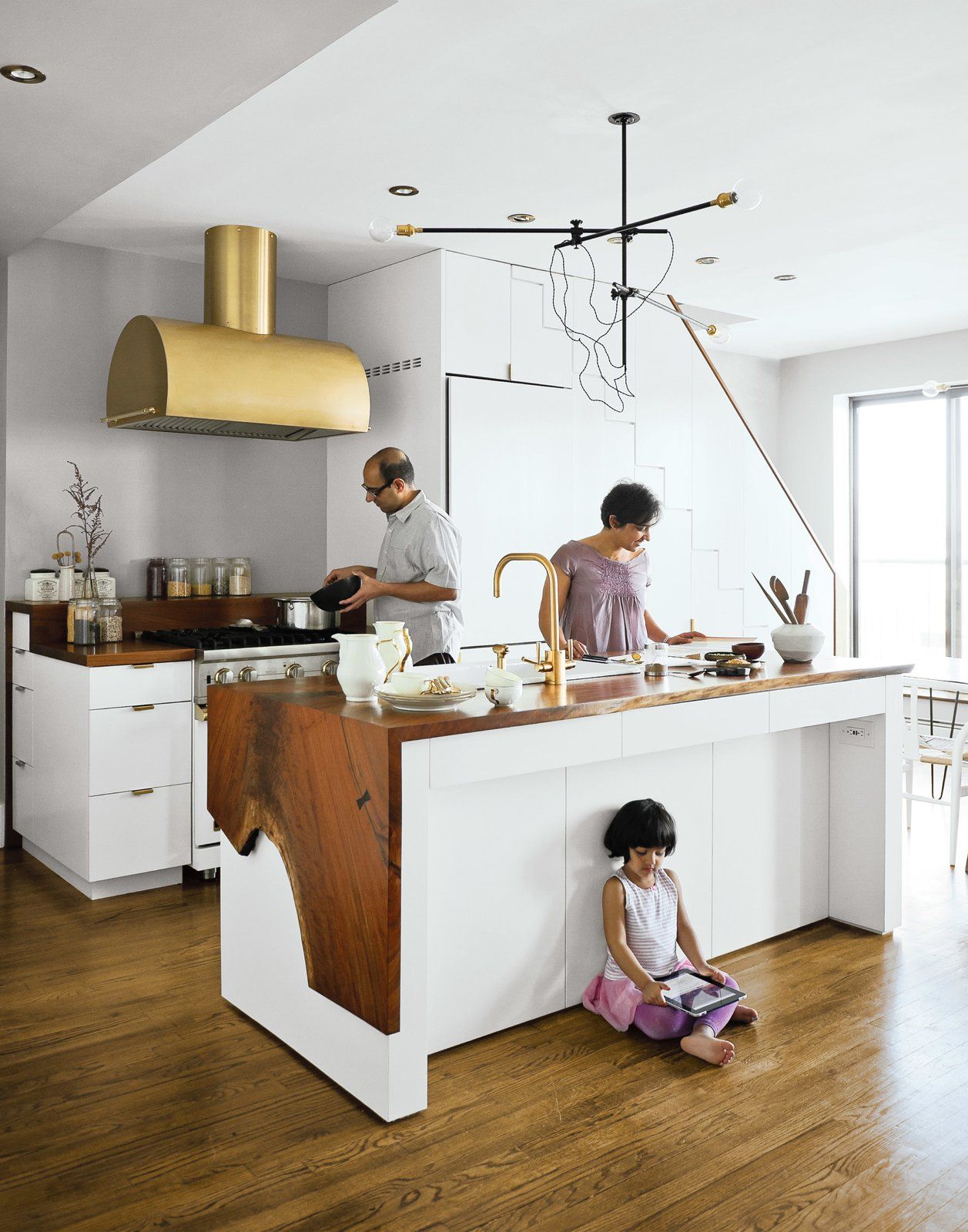 A waterfall countertop doesn’t always drop all the way down to the floor. This one, for instance is made of wood and ends with an asymmetric cut that showcases the live edge of the panel.found on dwell.

Island with seating – for large families 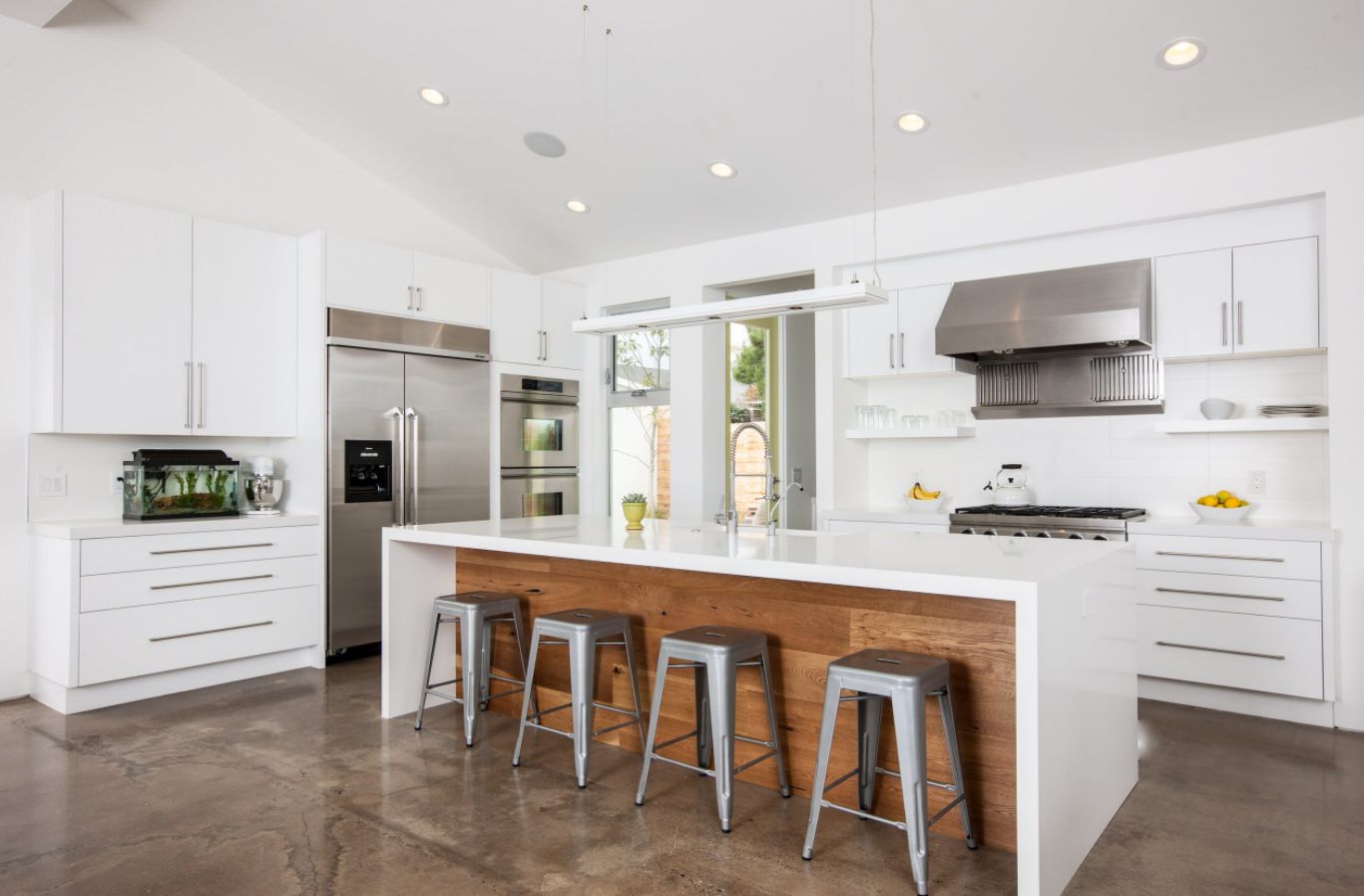 In addition to the aesthetic advantages of a waterfall counter, there are also practical details to take into consideration. The most important one of all is the fact that waterfall counters are easier to clean in comparison with the regular kind. 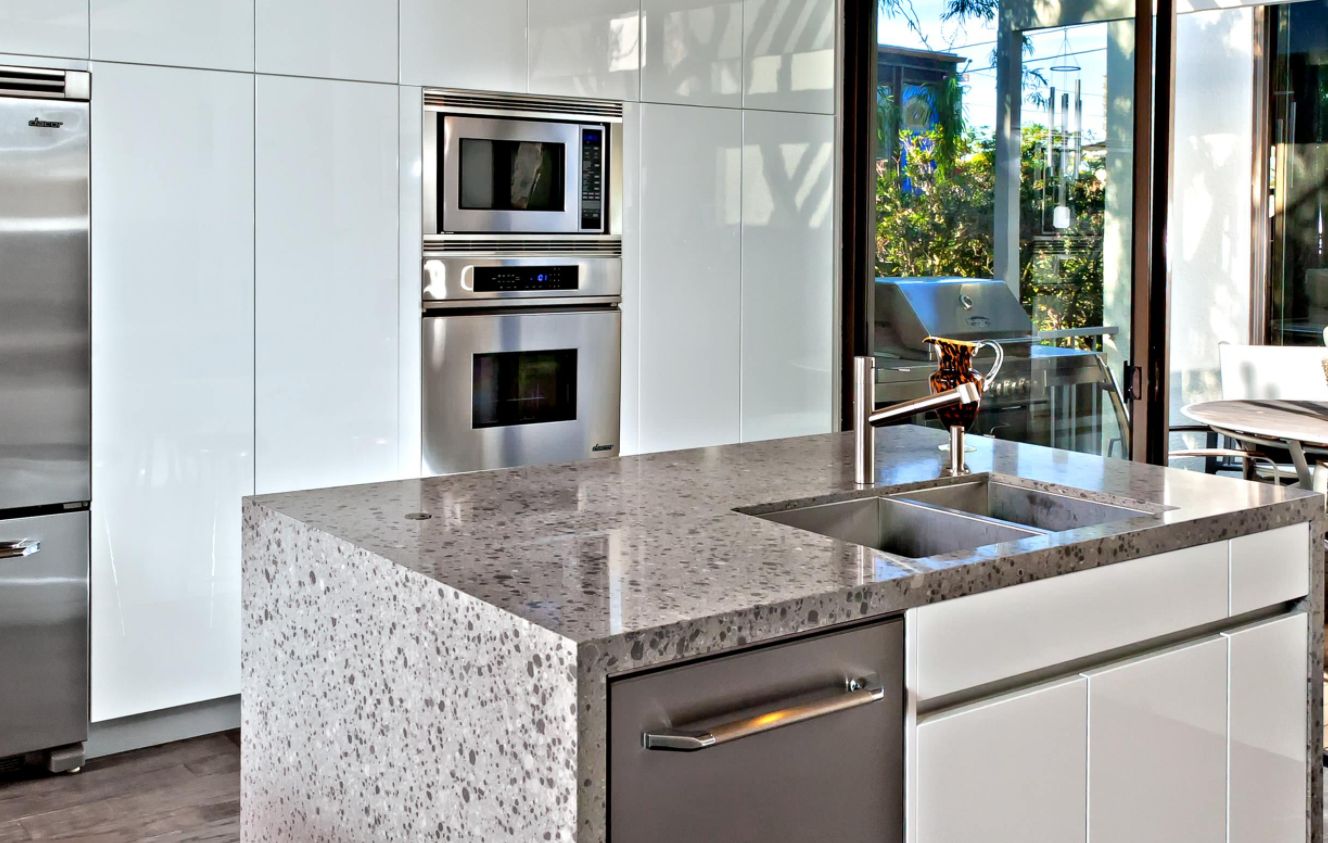 If you’re planning on having a countertop made out of a material which you love the waterfall design allows you to put an emphasis on it and to make the material stand out more. Of course, that means a considerably higher price.

Extension of the island and waterfall wood countertop 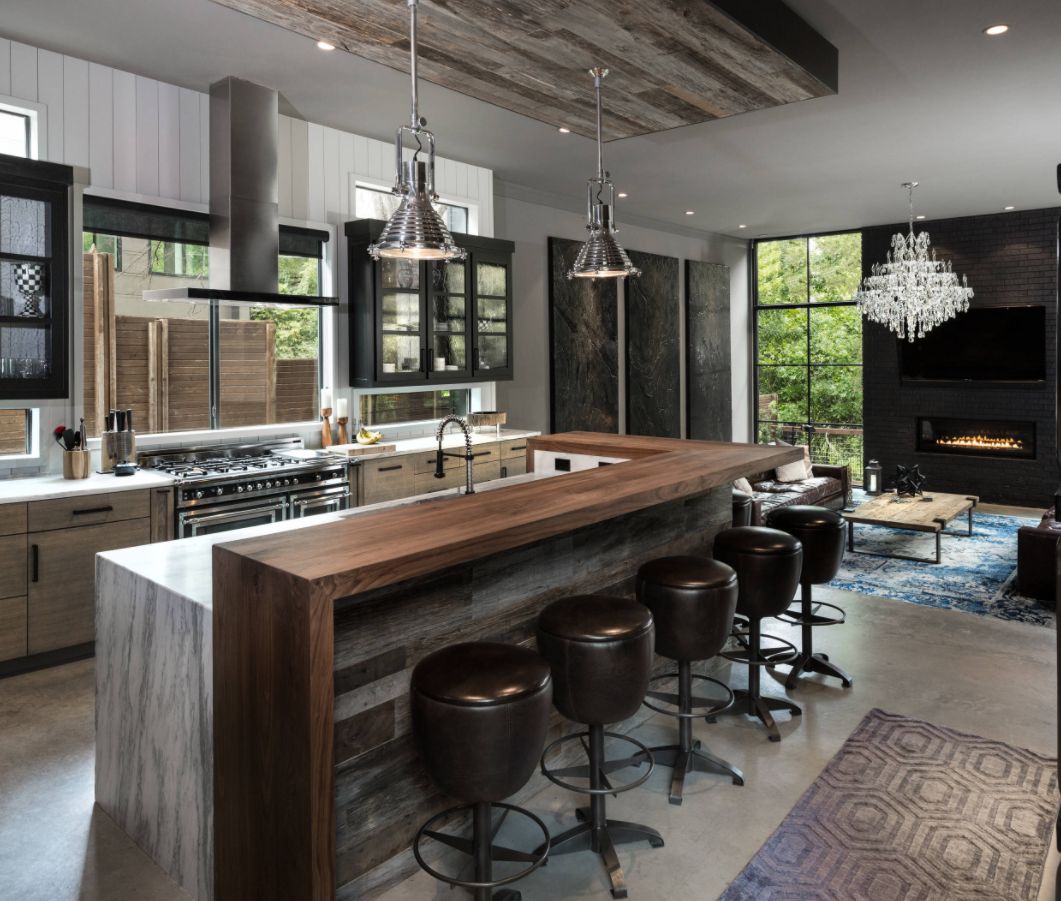 The waterfall design can also be adapted to suit kitchen islands which have a raised bar extension or which feature two different heights or materials. This is how such a design could look like if you were to have an island which blends marble and wood and which has a built-in bar. 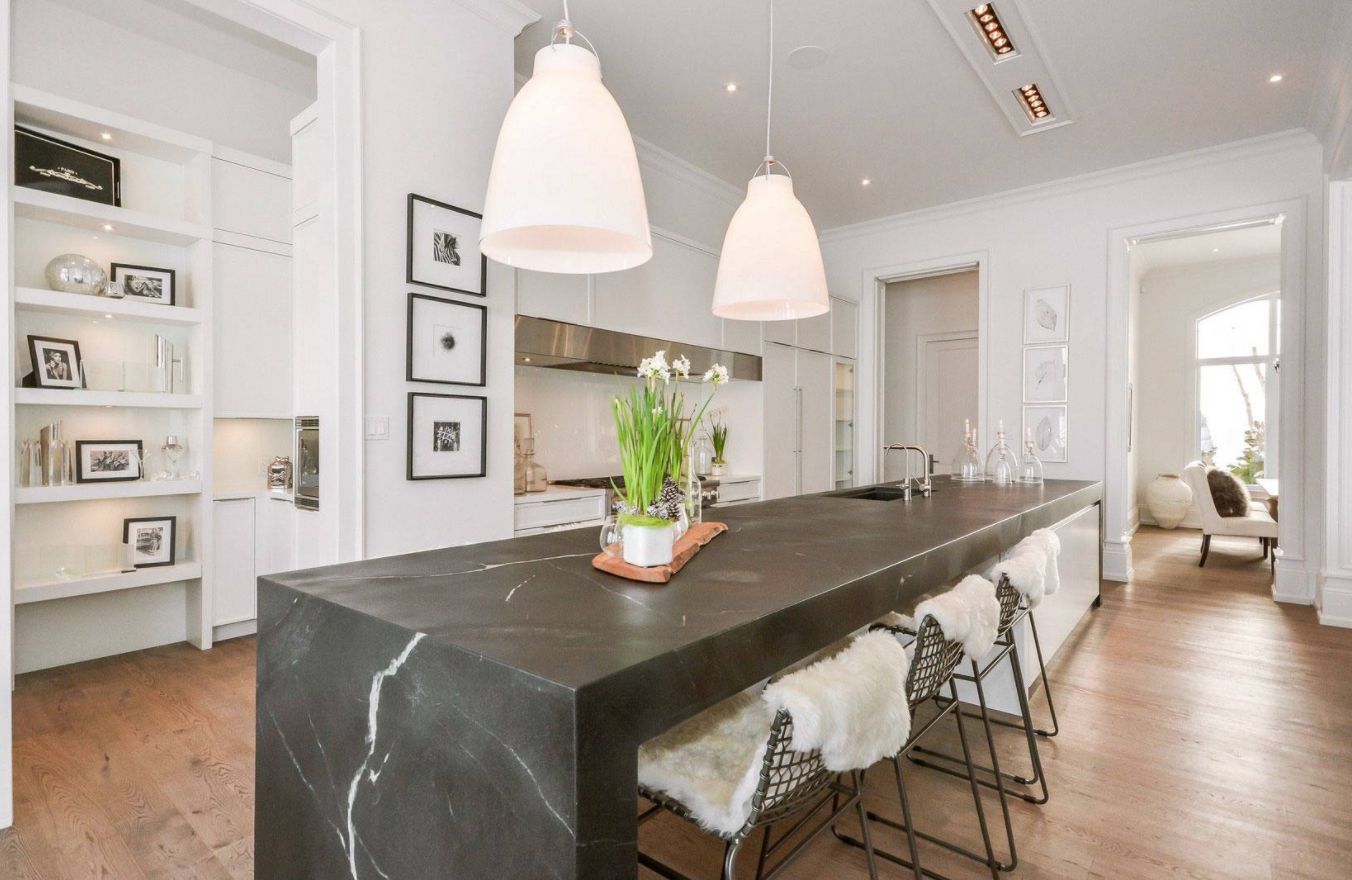 When working with marble, the tricky part is to perfectly line up the pattern when creating a waterfall counter. The veining has to line up if you want to put an emphasis on the fluidity and the continuity of the design.found on timberworx.

Over the kitchen island hood 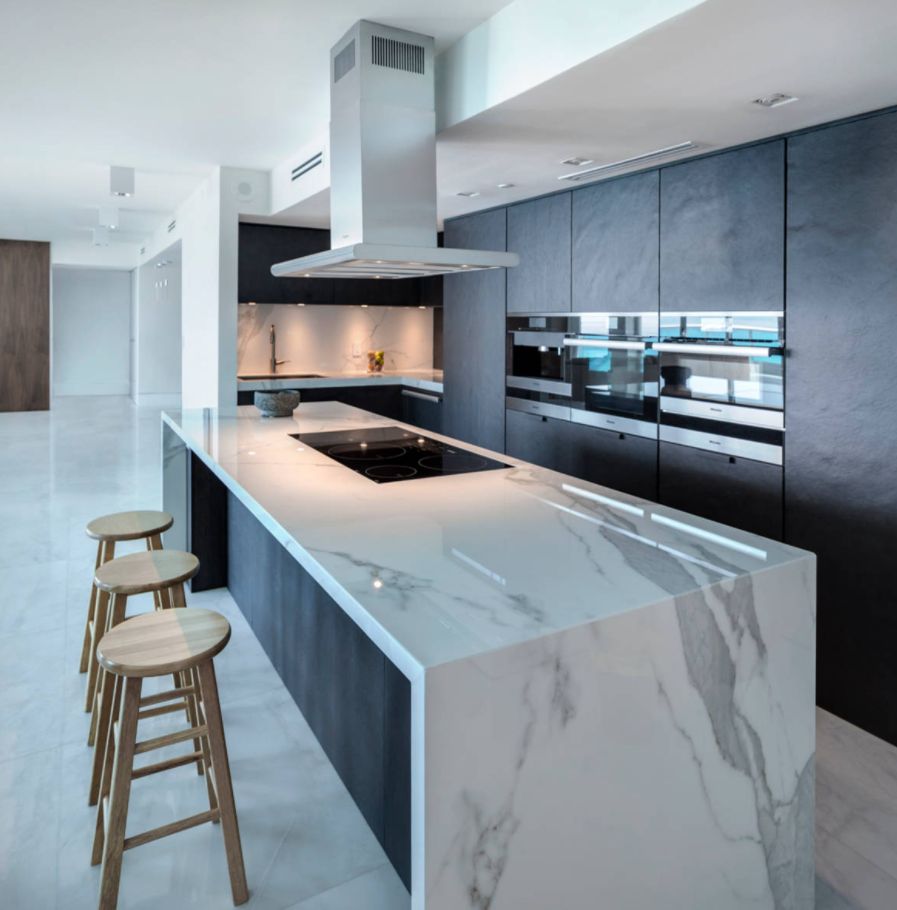 Making it look like the counter molds onto the island as if it’s fluid is not easy. It takes a professional to get it right, especially when working with materials like marble or natural stone in general. 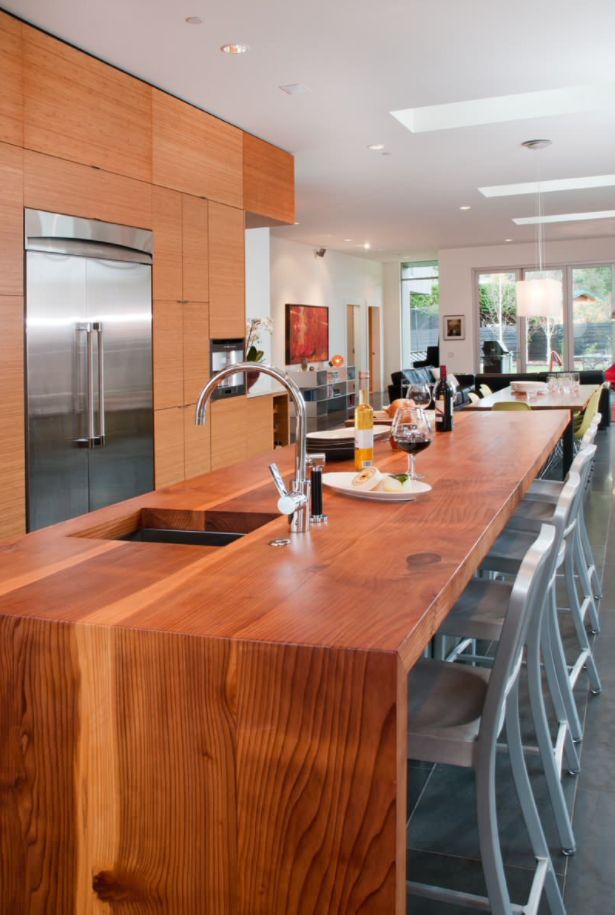 Wood is a more forgiving material, one that’s more accessible to DIYers compared to stone. Of course, that doesn’t mean anyone can make a waterfall countertop, even if wood is the material of choice. In fact, creating a fluid a continuous design can be pretty tricky even if you’re working with a single huge wood slice. 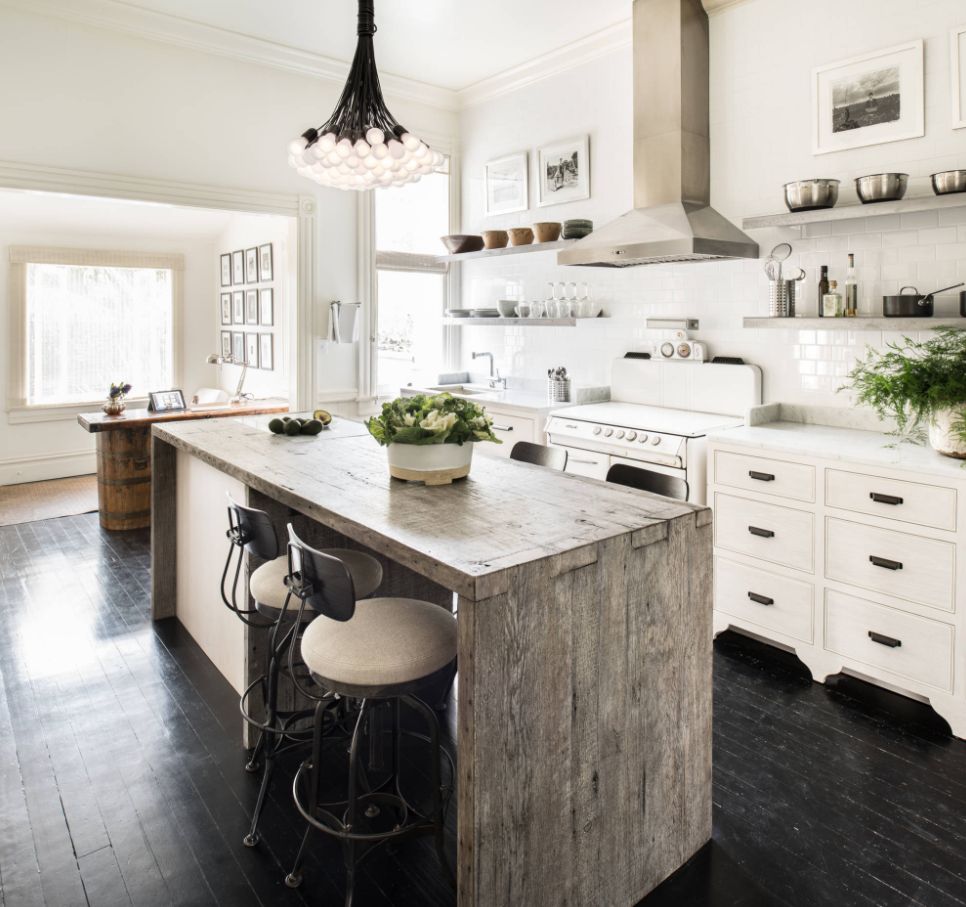 Reclaimed wood makes things a bit easier. Imperfections are viewed as quirky features which add character to the counter and make it look special and unique. Similarly, certain types of wood and certain finishes are easier to work with from this particular point of view.found on antoniomartins. 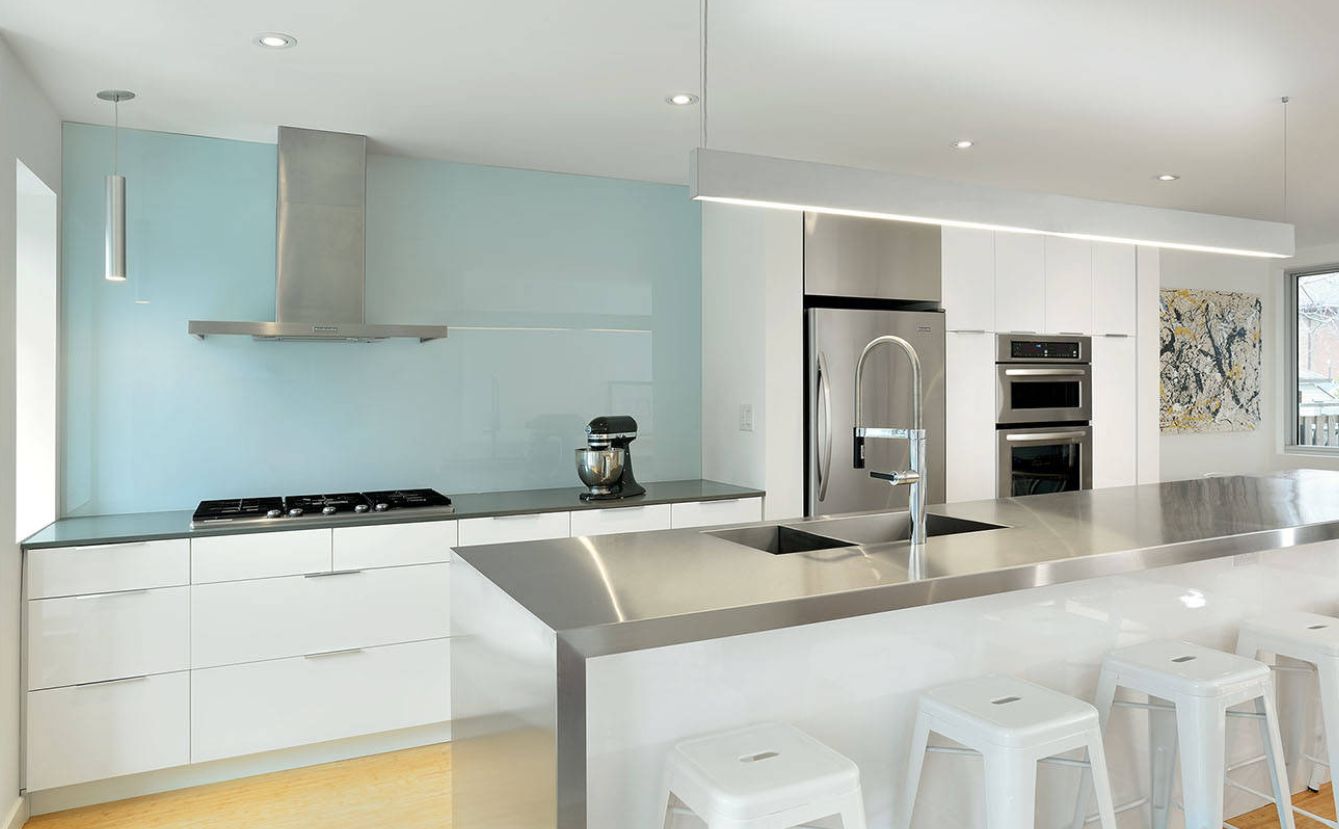 Stainless steel is also an option. It’s a great counter material because of its antibacterial properties and the fact that it’s easy to care for and to clean. A waterfall design puts an emphasis on the polished and shiny nature of the counter. 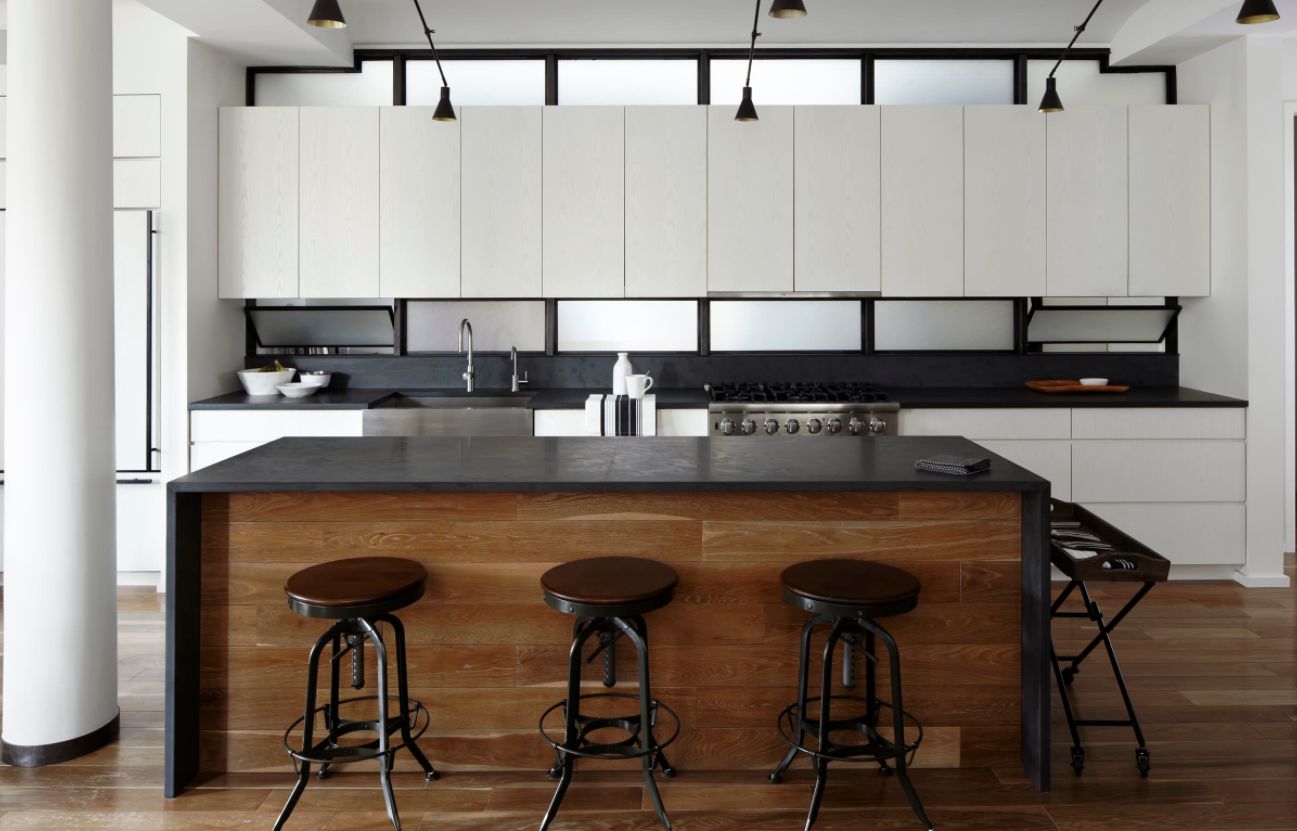 The thickness of a waterfall countertop can vary a lot. This one, for example, is quite thin and that gives it a sleek and lightweight appearance as opposed to a think counter which looks very solid and heavy. 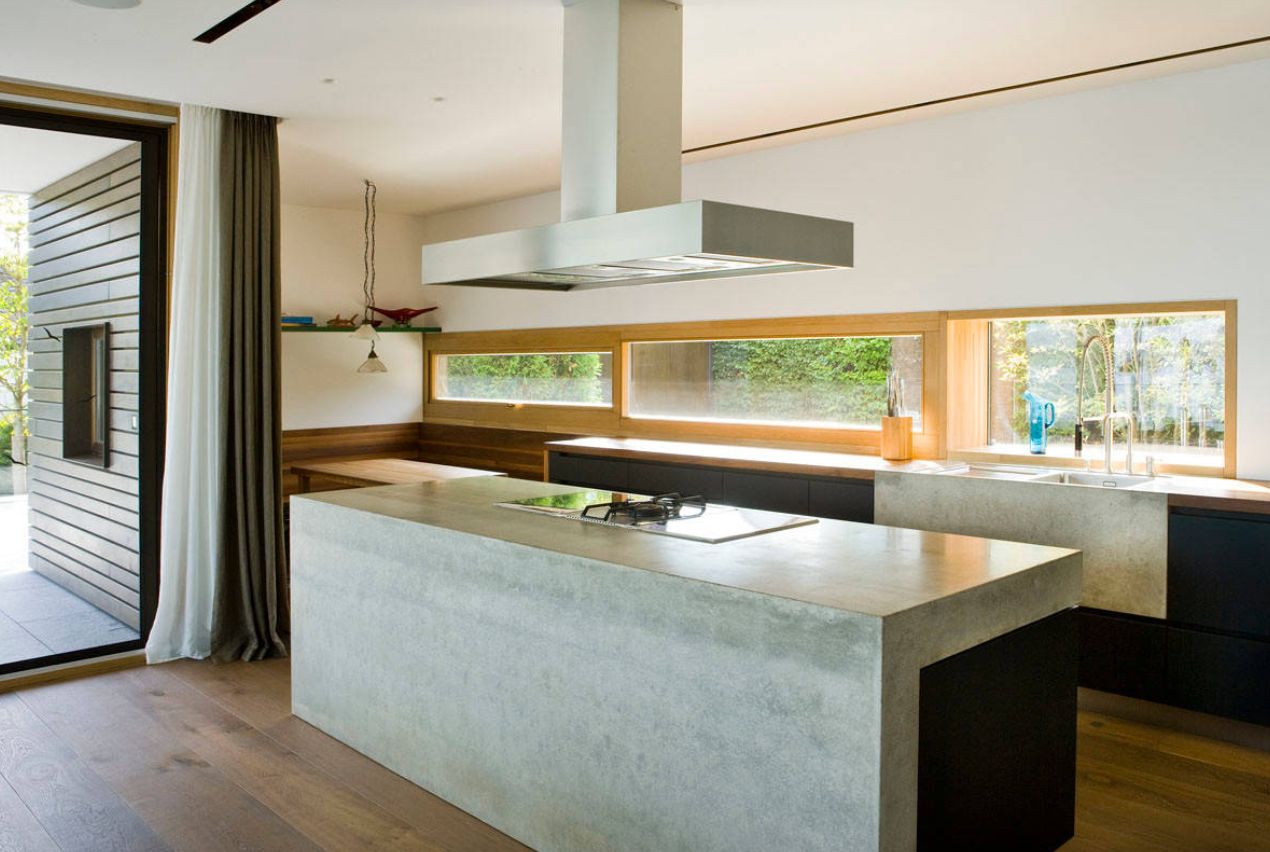 Concrete countertops are DIY-friendly, just like those made of wood. In fact, concrete may even be easier to work with than wood in this context. It’s also a great counter material with lots of great advantages to take into consideration. 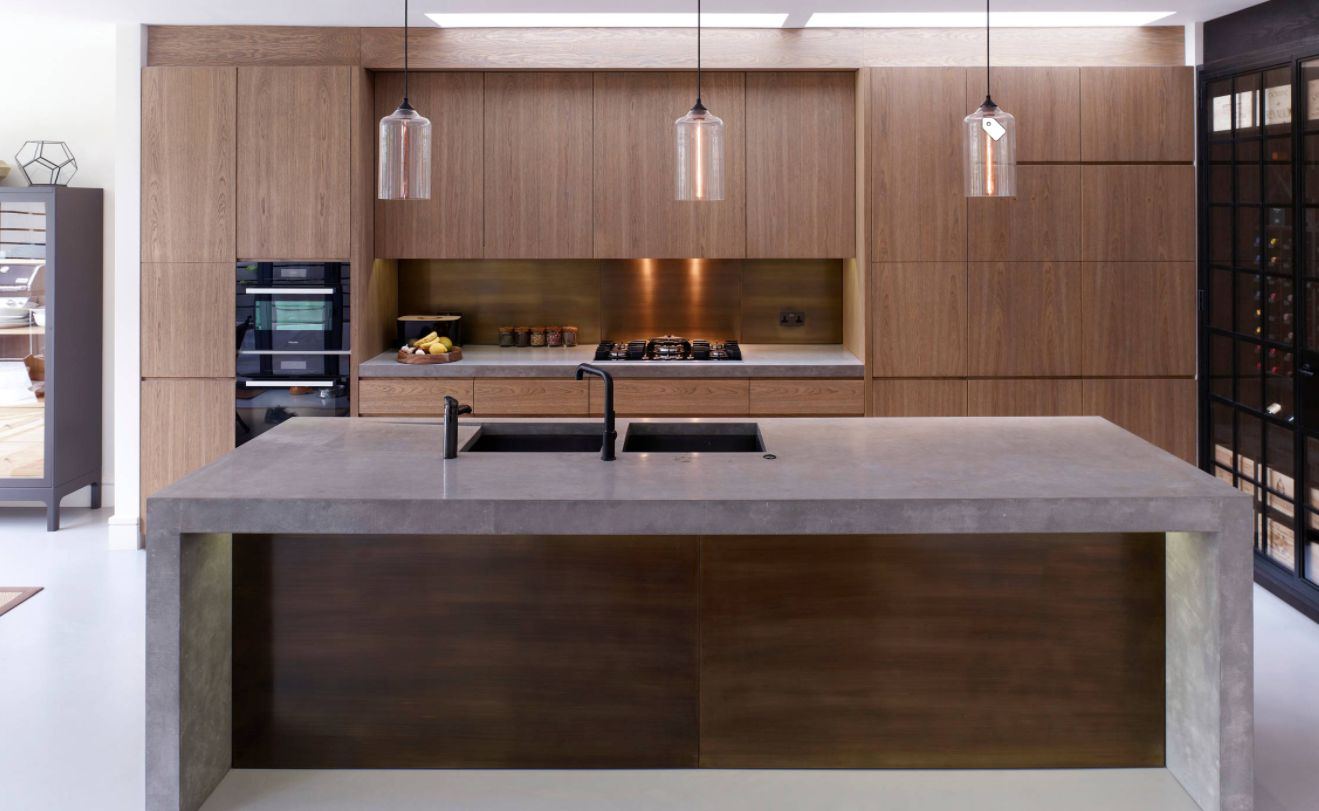 A waterfall design is a perfect choice if you’re planning to have a kitchen island which can double as a bar of breakfast table. The counter can be like a shell which extends beyond the width of the cabinet, almost as if it’s an independent feature. 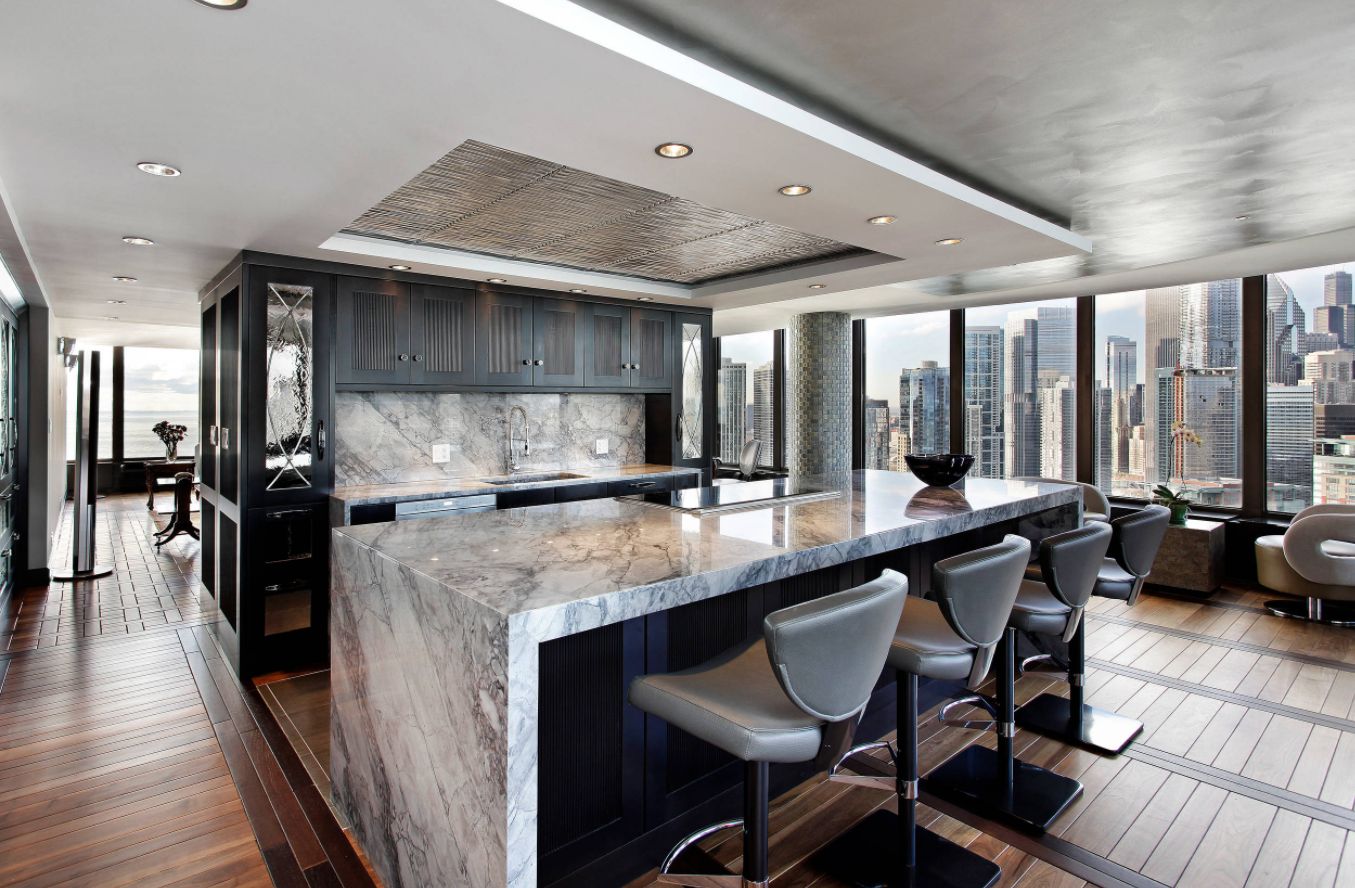 Marble is sophisticated, elegant and classy so what better way to put the spotlight on it than with a waterfall island counter? Since the material is the focal point, the design of the island can be minimalist and focused on practicality.

The post Keep Up With The Waterfall Countertop Trend – Looks That Inspire appeared first on Home Decorating Trends – Homedit.