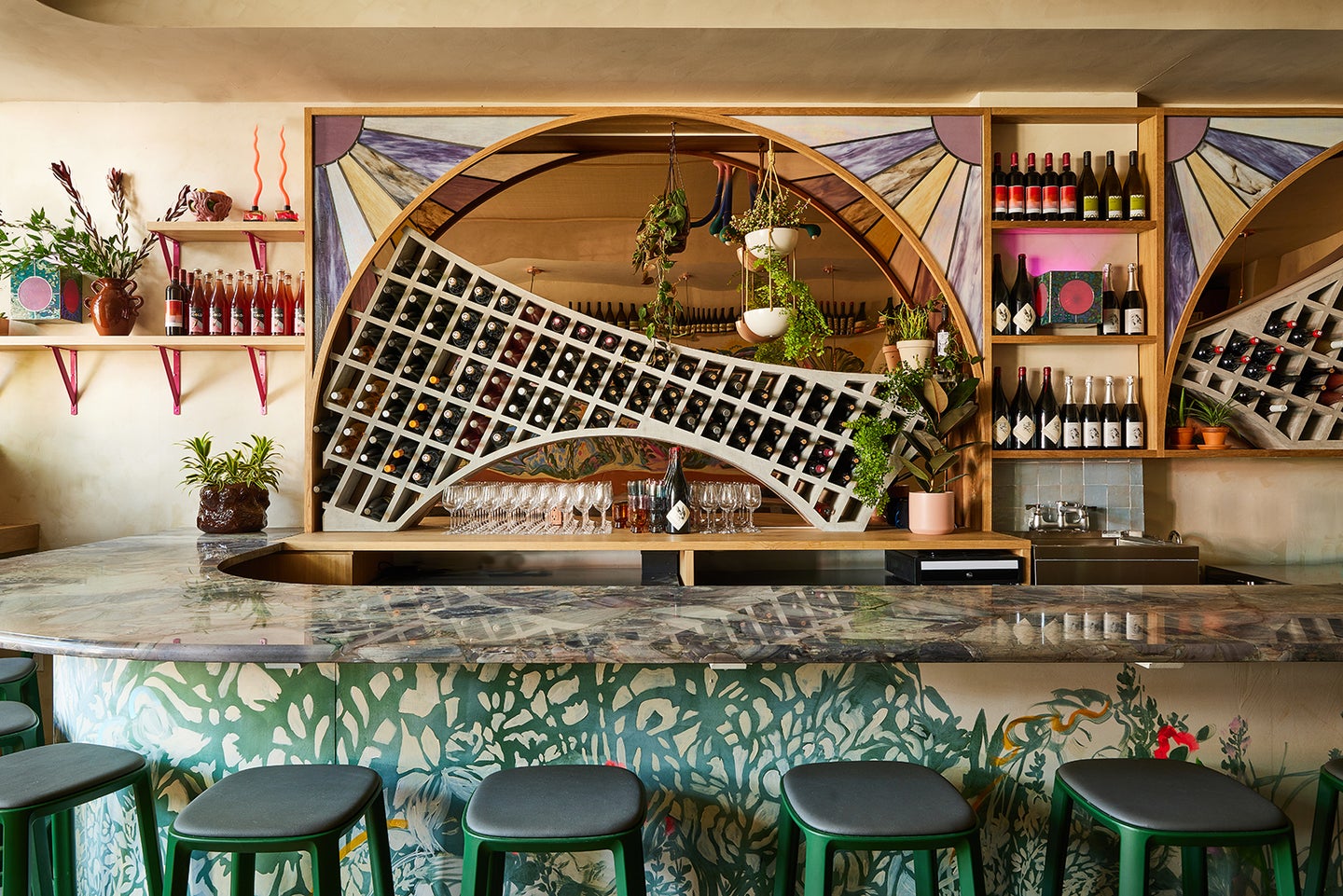 “[Walking into Moonflower] is like visiting a kooky winemaker on the West Coast,” Johnson says of the over-the-top colors and hand-painted murals. “We would be the art shack they have in the back garden. That’s the vibe I was going for.”

To achieve that, Johnson and McDermott mixed genres—from Art Nouveau to Brutalism to Arts and Crafts—and went wild with materials (think: stained glass everywhere) and even painted some pieces themselves, like the bar’s facade.

“We wanted to use beautiful, sophisticated materials so that we would fit into the West Village but still have a bar that is approachable and whimsical and doesn’t take itself too seriously,” Johnson says of striking the right balance. “It isn’t meant to be precious.”

Odds are, your home isn’t a wine bar (well, not officially anyway), but there are plenty of ideas for you to steal from Moonflower and incorporate into your living space. Here are our top three.

Stained-glass pendant lamps by artist Keith VanPelt dangle over the banquette, the window-facing bar top, and the teeny-tiny kitchen in the back. “There’s something really delicate about them but also delicious—as if they were candy,” explains Johnson. “People love to talk to us about them, and we can even hear groups of people having discussions over which ones are their favorites.”

VanPelt also created the churchlike pastel panels that frame the bar, but in your own space, you could achieve a similar look in a kitchen or entryway. Johnson reports that VanPelt does take on custom projects. For something more affordable, she is a fan of Colin Adrian Glass, where you can pick up glass incense holders and window ornaments.

Two concrete wine cases by Cassius Castings’s Thomas Musca hold bottles along the back bar, though they don’t seem like an obvious choice. They’re heavy; they’ve got a lot of sharp angles; and they’re gray. But it turns out, they’re a welcome respite from the explosions of color elsewhere.

Musca designed the cases to mimic New York City’s grid, and to fill in the molds, the Moonflower team threw a 150-people concrete-pour party. “I look at them now as concrete sculptures,” says Johnson, adding that their rawness makes perfect sense for the low-intervention wines that the bar carries.

It’s unlikely you’re going to want your own 200-pound concrete wine rack, but Cassius Castings can make a much more apartment-friendly version. “This giant wine-case sculpture actually stemmed from an eight-bottle rack holder Thomas previously gifted us,” says Johnson. Otherwise, adding raw, Brutalist touches to your home can be as easy as ordering these minimalist candleholders fashioned out of volcanic rock or this splurge-worthy ceramic-brass-and-glass chandelier by designer John Sheppard that Johnson has had her eye on.

Paint covers almost every surface at the bar, and much of it is hand-done by Johnson herself (including the vines under the bar and the secret garden scene on the opposite wall) or her friends. “We want people to know that there are humans behind these pieces,” Johnson explains. “And I knew from the beginning that I wanted us to put our mark on this space as artists.”

The watering hole also proves that art isn’t just for walls. Johnson took a brush to the tables to create a floral motif, too. Elsewhere, there’s leather upholstery by AVO Studio; a framed painting of Johnson and McDermott’s two dogs by Macauley Norman, an artist from Jersey City; and in the bathroom, a psychedelic mural installation by Johnson’s sister Sarahgrace Johnson.

If you’re hoping to add a large-scale mural to your space, Johnson says contacting your favorite artist is the best way to do it; just remember to provide details of exactly what you’re looking for and include your budget.

But she insists that if you have the vision, do it yourself. “Keep the scale manageable; you don’t have to go big to make an impact. Try stencils or freehand shapes to decorate furniture or door trim,” she suggests. “Painting is always worth it. The worst that can happen is you paint over it!

The post Drink Up All the Stained Glass, Floral Murals, and Natural Wine at This New NYC Bar appeared first on domino.